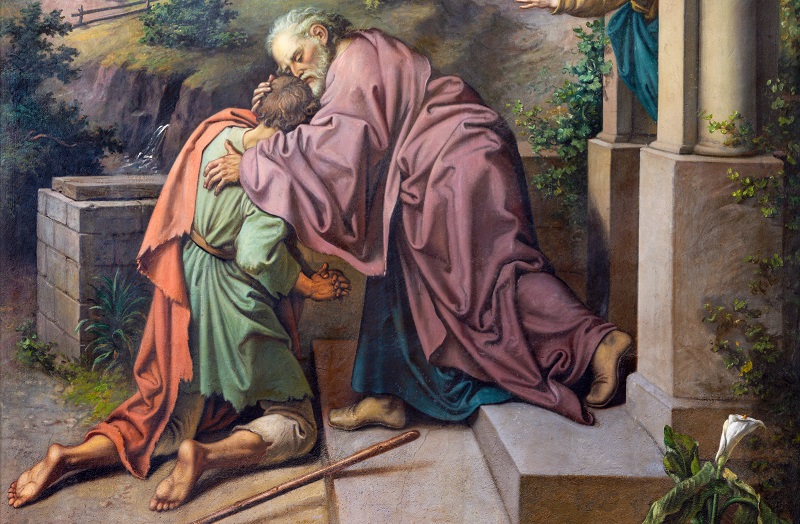 Parenting is difficult. In fact, it is the greatest challenge many of us will ever face. If you have had kids for more than about six hours, you know this to be true. There is no greater reward, but it comes with a lot of bumps and bruises along the way. I can’t begin to tally the number of hours of sleep that I have lost over the past fourteen years of being a father (although, to be fair, I would wager a guess that my wife has lost even more). Sometimes it has been because of the 2:00 a.m. wake up calls (“Mommy, Daddy, I don’t feel so good”), but for me, it is more often due to lying awake, agonizing over the opportunities I missed that day or the ways I reacted to my kids instead of guiding them.

Ah, but then there are the times that you are faced with a challenging “kid moment” and you nail it! For me, these are certainly the exception rather than the rule, but when they come, the impact on both me and my girls is far more lasting than my many screw ups.

A couple of years ago, I experienced such a moment (although even with this one, I must admit that I stole my strategy from another father who is much more qualified than I am).

I am extremely careful about calling out specifics from my kids’ private lives in public, so suffice it to say that one of my girls had a bad day at school. A really bad day. As in a visit to the principal’s office kind of bad day. As in a call home from the school kind of day.

When she got home, she expected to meet an angry father who would be slow to listen and quick to punish. It’s heartbreaking, but my responses in the past had given her cause for such concern. But this day, her expectations strayed far from reality.

When my daughter got home from school, I asked her to go up to her room and wait for me to come up. I can only imagine what was going through her mind at this point. I gave her a couple of minutes to settle in, prayed for guidance and grace, and then headed up the stairs. When I entered her room, she was curled up in her bed. Her crying intensified, because she knew that punishment was coming.

Her remorse was clear. Her disappointment in herself was evident. And honestly, while I knew she was crying because she was afraid of the consequences she would face, I believe she also wept because she believed she had disappointed her father.

“It sounds like you had a rough day,” I said. No reply. Just intensified weeping. She buried her head in her pillow and refused to even look at me. She was scared, embarrassed and ashamed.

Instead of yelling and punishing, I simply curled up next to her in her bed and hugged her. Tightly. She squirmed and shifted, but my resolve was strong. She never really tried to pull away, but it was clear that she was uncomfortable with this unexpected turn of events. This went on for quite some time, but I had determined that unless she told me to let her go or legitimately tried to push me away, I was not letting go.

Finally, after at least thirty minutes had passed, she quit struggling. She simply laid still and let me hold her. She had quit crying, and while I am sure she was still upset, she seemed at peace. I held her for about ten more minutes, whispered to her that I loved her, that tomorrow was a new day, and then got up and walked out.

My daughter expected – and deserved – to be punished. In fact, she was uncomfortable with not being punished. And sometimes, punishment is a necessary part of discipline. But this day, it was not in the cards. Instead of being rebuked or grounded, she got a hug from Daddy and a reminder that she was loved and valued.

From that day forward, I noticed a significant change in her demeanor. She (mostly) quit getting in trouble at school. She was less anxious. She spoke with a different tone. Most importantly, I felt as though she and I were connecting in a way that we had not for some time. Both of our hearts were changed that day, and it is one neither of us will ever forget.

The lesson? Grace is transforming.

Grace: Receiving What We DON’T Deserve

Last week we spent some time examining the parable of the prodigal/knuckleheaded son. When we ended, the son had just returned home from sowing his “wild oats,” hoping that he might be welcome back as a servant, since he no longer deserved to be a son. When the father sees the son, he runs out to meet him. He sees the regret and sadness in his son’s eyes, and instead of rebuking him, he shows him mercy. He gives him a hug and a kiss, and he welcomes the boy home.

If the passage ended right there, it would be a beautiful story. But it wouldn’t be the full gospel. So let’s continue . . .

“But the father said to his servants, ‘Bring out the best robe and put it on him, and put a ring on his hand and sandals on his feet. And bring the fatted calf here and kill it, and let us eat and be merry; for this my son was dead and is alive again; he was lost and is found.’ And they began to be merry.”

When the son makes the decision to return home to his father, he prepares himself for a pounding. Instead, he receives a party. It is passages like this one that leave me baffled when I hear folks complain or imply that God is somehow holding out on them.

And by “folks,” I quite often mean me.

According to Louis Berkhof in his book, Systematic Theology, the New Testament word “grace” is derived from the Greek word charis, which means “unmerited favor or goodwill.” Berkhof goes on to say that the word “denotes the kindness of beneficence of our Lord, or the favour manifested or bestowed by God.” In short, God demonstrates grace when He shows us kindness and blesses us in ways that we don’t deserve.

And He shows kindness and blesses us in ways we don’t deserve a lot . . . because we never deserve it.

Psalm 145:8 tells us that “the Lord is gracious and merciful” (ESV). In Colossians 1:15, Paul the Apostle writes that Jesus “is the exact living image [the essential manifestation] of the unseen God” (AMP), and John tells us in his Gospel that Jesus was “full of grace and truth” (John 1:14b, ESV). These are just a couple of passages throughout Scripture that speak to us of the overwhelming grace of a Father that loves to give good gifts to His children (James 1:17, Matthew 7:11), despite the fact that we don’t deserve them.

And while we are on the subject of undeserved favor from God, one more verse deserves mention: “For by grace you have been saved through faith. And this is not your own doing; it is the gift of God . . .” (Ephesians 2:8, ESV). God’s extravagant grace is best demonstrated in the fact that, through the death, burial and resurrection of His Son, Jesus, He made a way for us to spend eternity with Him.

We deserve death and eternal separation from our Father. We receive eternal life and citizenship in heaven.

This is grace. This, too, is our heavenly Father.

Once again, if what we have discussed thus far was all that there is to this story, understanding and embracing the truths it presents would be life-altering. What a beautiful picture of the Father’s heart for His children! God loves to show mercy and bless us with undeserved favor when we turn to Him in humility. But at the risk of sounding like a late night infomercial . . .

Undeserved blessing is only a part of the grace equation, and without the other half, I think we still miss an integral truth of the gospel. Notice that when the son returns home, his father orders his servants to bestow three specific gifts upon the son. Each has incredible significance that is too important to miss!

What is actually taking place in this story goes far beyond a merciful father demonstrating unmerited favor over his son’s life by showering him with gifts that he does not deserve. By covering his son with the best robe, placing a ring on his finger and shoes on his feet, the father is indicating that his son has been fully restored to his position as a son. The father makes quite a show of it, intending to make this restoration reality clear to all who are observing it.

The message: “I forgive you. I love you. You are my son. Now live like it!”

So what is the grace of God about? Since you can’t really separate God’s grace from His mercy, let’s start there. It is about forgiveness. Forgiveness that only comes through the shed blood of Jesus. It is about love and favor being poured out over our lives, even though we deserve nothing good from God (“. . . while we were still sinners, Christ died for us.” – Romans 5:8, NKJV). It is about complete restoration — while we are called to serve, we do so as sons, not hired hands or slaves.

And finally, the grace of God is about calling us to embrace all of this and live like those who are forgiven, loved and highly favored by our Father. So let’s get to it!

As always, I invite you to share any questions, comments or feedback in the comments section below, or to connect with me for discussion on social media. I look forward to chatting with you soon! In the meantime, you might enjoy reading this post about the freedom that is found in living as a forgiven, loved and favored son: Biblical Self-Esteem: How to Love Ourselves the Way God Desires.

2 thoughts on “What is the Grace of God About? Remarkably More than You Might Think!”